An Open Letter to a Person of Privilege

As a professional pontificator against Privilege that is white, male, and heterosexual, you certainly have a nose for Privilege – of certain kinds.  There is another kind of Privilege as yet unnamed that I think you are especially qualified to help make more visible.  I’ll get to that in a moment.

But first, I’d like to compliment you on your courage.  You’ve put together an annual White Privilege Conference where you take on the power and privilege of the most powerful and privileged people in the country.  I can only imagine the institutional resistance you face from white-controlled government agencies, universities, and corporations – at least the ones that aren’t funding your conference and paying the travel costs of attendees.  I can only imagine the threats and intimidation you must persevere through year after year when white rowdies invoke their Privilege to harass speakers, attendees, and the facility provider in a campaign to shut down your conference.  People who believe that their hurt feelings over racially provocative discussions entitle them to shut down such discussions reek of Privilege.

But hat’s off to you for making a career out of shaming people of whiteness for their oppressive skin shade.  You could have taken the easy path to success by pursuing an academic career in one of the thousands of European-American studies departments – you know, those pseudo-intellectual ethnic advocacy platforms that colleges allow Privileged whites to set up so that they can propagandize for special Privileges, such as ending race-based admissions.

You could have taken the easy path by establishing a Moochers of Color Conference or a Black Criminality Conference.  Then, you wouldn’t have risked getting pegged with the label of “anti-white.”  In an environment of White Privilege, being called “anti-white” is about the worst thing that can happen to one’s reputation and career prospects.

Whites need never worry about the consequences of being branded “Racist.”  Diversity industry careerists who hurl accusations of Racism from White Privilege Conferences, sprawling Affirmative Action bureaucracies, and the offices of the U.S. Justice Department are marginalized and have no power.

You know which side of a political debate is institutionally Privileged when you know which side can get the other fired, fined, or jailed over a disagreement.  When it comes to the definition of “hate speech,” one side gets to draw its own list of “protected groups” and gets to take down YouTube videos and other communications it finds offensive.  We all know which side that is.

Whites constantly use their power and privilege to advocate specifically for white interests.  Whether it’s the Congressional White Caucus, the National Association for the Advancement of White People, the National Council for La Blanca, or White History Month being relentlessly promoted by old-white-male media moguls such as Chris Matthews, only whites enjoy the Privilege of engaging in organized ethnocentric agitation.

Since Jews on a per capita basis hold more wealth, control more media outlets, lead more corporations, and occupy more spots in legislative, judicial, and central banking bodies than whites, Jews must be more Privileged than whites.  Face it, you wouldn’t be where you are today without your Privilege. It’s time own it and speak out against it – or you, too, will be perpetuating Social Injustice.

If you deny Jewish Privilege, then you open the door for Racists to offer genetic explanations for why Jews excel. Of course, Social Justice requires that all populations be innately the same as Ashkenazi Jews.  There can be no genetic differences between ethnic groups.  The fact that some populations have differently shaped and sized skulls than others is just nature’s way of testing our a priori faith in innate equality.

If you deny Jewish Privilege, then you are consciously or unconsciously justifying cultural imperialism. We all know that no religions or cultures are better than any others; that all cultures have equal value and make equal contributions to humanity.

All cultures are equal, but some are more Privileged than others.  Jews are only 0.2% of the world population and therefore should be only 0.2% of Nobel laureates.  Instead, Jews are 22% of all Nobel Prize winners. In Physics, Chemistry, Medicine and Economics, Muslims hold just two Nobel Prizes.  Jews hold 158.

At elite Ivy League universities, people of Privilege can comprise more than 20% of student bodies despite being only 2% of the U.S. population.

It’s not merit. It’s not luck. It’s Privilege. The single biggest impediment to achieving full Diversity with 100% equal representation at universities and other American social, cultural, and political institutions is Jewish Privilege.  Gentiles and people of color face institutional barriers throughout society’s upper echelons because of Jewish Privilege.

Stronger Diversity goals must be instituted at Harvard, at your University, at the Federal Reserve, and everywhere else where Jewish overrepresentation exists. For example, at Harvard, our Diversity goal must be to replace 90% of the extant Jewish student body with representative numbers of gentile whites and students of color.  This is the kind of Affirmative Action that’s needed – by any means necessary.

But first we need to raise awareness about the problem.  That’s why we need a Jewish Privilege Conference.  I’m counting on you to help make Jewish Privilege more visible by throwing your weight around and wearing your Privilege.

Some of your fellow White Privilege indoctrination specialists have demanded that white people wear White Privilege wrist bands in order to make their Privilege more visible. I couldn’t think of a more important cause for a wrist band to symbolize.

At the Jewish Privilege Conference, I’m sure you’ll find gentiles who are willing to hold you accountable for your Privilege. In the meantime, I think what you can do to help raise awareness about Jewish Privilege is to wear a yellow Star of David. 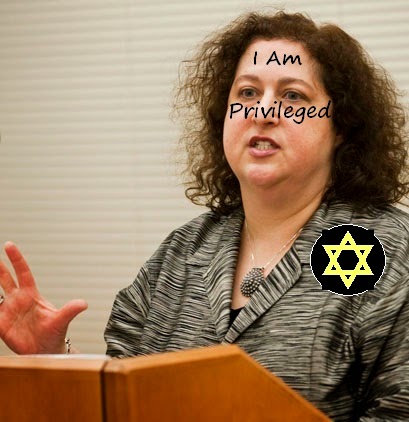 It’s not about scapegoating the Privileged Ones or trying to make them feel guilty. Not at all!  It’s just about making the arbitrary social construct of Jewishness, and the Privilege that flows from it, more visible.

Set the example – make your oppressive social Privilege visible so that your unearned social standing as a public intellectual can be deconstructed.  It’s for Social Justice.


Posted by Libertarian Realist at 10:54 PM