Donald Trump’s statements following Charlottesville should have seemed perfectly sensible to any normal person who isn’t part of an anti-Trump cult.  The only way I can make sense of the histrionic hysterics of the mob’s reaction is by conceiving of post-World War II Americanism as a cultish meta-ideology that binds both Democrats and Republicans.

Trump stepped outside the cult’s moral boundaries, ever so slightly.  But any breach, no matter how small, triggers dedicated cultists to erupt in moral panic.


For those of us who exist outside the cult, it’s hard to understand what the anti-Trump panic is even about.  Trump repudiated the violence in Charlottesville that took place on both sides.  That wasn’t good enough.   Then he repudiated Nazis, KKK, and fascists USA by name. He recited approved cult platitudes about racism being bad and equality good.  It was too little too late.  The cult wasn’t satisfied.


Then Trump did the unspeakable: he condemned violence coming from what he called the “alt-left.”  That’s when the cult’s moral panic turned into bipartisan/corporate/media mass hysteria.

Even having as low an opinion of establishment Republicans and conservatives as I do, I honestly didn’t foresee them lining up one after the other – from Marco Rubio to Paul Ryan to Mitt Romney to the editors of National Review – to attack Trump specifically for attacking leftists. 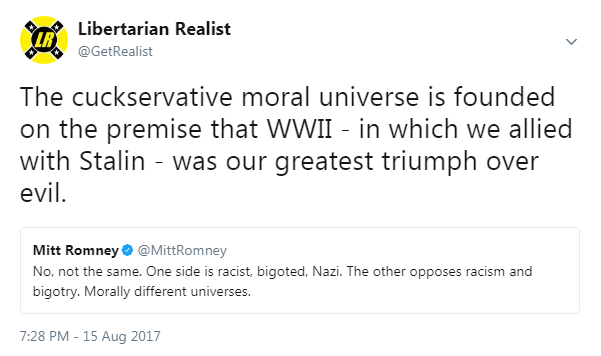 I knew they were all going to line up to try to out signal each other in denouncing white supremacy and bigotry and all the rest.  That’s fine as far as doing so in the name defending conservatism goes.  Conservatives stand rhetorically for freedom, the Constitution, and color blindness.  Alt-righters went to Charlottesville to rally for something far different.


For myself and for the record, I oppose anti-freedom ideologies.  That extends to opposing national socialism.  It is a form of authoritarianism that borrows heavily from the economic left.  And to the extent that it places racial loyalties above all else, it can become a cult that inspires its adherents to take drastic actions that put their lives and those of others at risk.


I don’t know if the driver who ran his Dodge into the crowd identifies as a national socialist.  Whatever his motivation was, he deserves to be convicted of a serious felony.


Establishment media personalities began insisting it was white supremacist “terrorism” before the driver’s identity was even known.  They tried to shame Trump and others for failing to rush to judgment quickly enough.


We now know that the car was struck by an alt-left protestor with some kind of baton just before it suddenly sped into the crowd.  That makes premeditated terrorism an unlikely motivation.  It appears more likely to have been a disproportionate response by a driver who experienced a rush of anger at the moment his car got attacked.  Reports indicate that the 20-year old has a history of lashing out violently against family members.  He was undoubtedly on edge being surrounded by a hostile mob.  Unless evidence surfaces that he went to Charlottesville with the intent to use his car as a political weapon, it’s not terrorism.  It’s road rage.


Plenty of convictions also deserve to be handed down to alt-left thugs who targeted peaceful protestors, bystanders, and journalists with punches, clubs, pepper spray, and worse.  The city of Charlottesville and commonwealth or Virginia also need to be held accountable.  They illegally shut down constitutionally protected political speech and failed to protect people from violence. Hate speech, however you definite it, is still free speech in this country.  Anyone who uses violence to shut down speech is engaging in barbarism.


I’ve been “out of bounds” myself for so many years that I had forgotten how dramatically the boundaries for acceptable civil discourse morph when the spectre of Nazism is haunting a discussion.  Or maybe I never fully understood the cult of Americanism’s explicit prohibition on denouncing any other group in the same breath as one is denouncing Nazis.


Even some professional journalists didn’t fully understand. Reporters who made the mistake of reporting that they saw Antifa initiating brawls against the alt-right, or that they heard hateful threats being made from the alt-left, were called out by keepers of the cult and forced to issue retractions.


Now we all understand: To rhetorically place Communist violence in the same category, or even the same dimension, as Nazi violence is to commit a mortal sin.

Trump’s irreligious attacks on the alt-left could literally end his presidency.  And if he is forced out, it will be absolutely 100% due to the treachery of cuckolded Republicans.  They refuse to speak one ill word against Antifa. These are anarcho-communists – the worst of the worst.  What they advocate is the antithesis of everything Republicans claim to stand for.  Antifa have viciously assaulted not just Nazis…but scores of Americans in MAGA hats who put Republicans in power.


By refusing to name the #altleft threat to our lives & liberty, grandstanding "conservatives" have gone from irrelevant to treacherous.
— Libertarian Realist (@GetRealist) August 15, 2017

To refuse to assign any blame to Antifa is unconscionable.  To go further and praise these anti-speech bigots as allies in opposing bigotry…and to provide moral sanction for them to continue their heinous activities after the President of the United States told them to stop… is probably the most despicable and most treacherous act these puppets for the establishment have ever committed against the people they are supposed to represent.


Now, Trump hasn’t exactly delivered on all the promises of his campaign.  I think he has made lots of mistakes since taking office.  But I was never prouder to call Donald J. Trump our president than when he faced down the fake news media and refused to abide the GOP’s pre-scripted moral cowardice.  A truly evil movement that aims to abolish our most valuable freedoms…that aims ultimately to demographically replace us by any means necessary – Trump dared to give it a name.  He named the alt-left threat to our lives and liberty in the same breath as he repudiated elements of the alt-right.


And the establishment cult revealed itself to be united in defending and protecting the modern offshoot of the most deadly ideology of the 20th century: communism.  We never really defeated communism.  It just morphed into something more insidious.  The same Republicans who turn the other cheek for Antifa are willfully complicit in funding cultural Marxism in government agencies and schools.


Why?  Because the genesis of current year Cuckservatives’ moral universe is World War II.  For them, our greatest triumph over evil occurred when America allied with Communist Russia to defeat Nazis.  Thus, to the Cuckservative, as to the Social Justice Warrior, as to anyone operating inside the cult of post-World War II Americanism, there can be only one ultimate evil in the world.  And it can’t be Communism.


No matter how many dead bodies may be piled up by Communists or Islamists or Black Lives Matter in a future incident, the outrage will be miniscule in comparison to what followed from a single death by road rage at the hands of a suspected neo-Nazi.  Black Lives Matter will never get condemned by an establishment Republican, never face censorship, and never inspire a CNN story on the problem of toxic blackness.  Islam will never be blamed for the actions of a few Muslims. And Democrats will never have to ritualistically denounce the ideologies associated with violence on their left flank.


Unless we usher in a new post-Trump Civil Religion in America that enables us to become free again, sane again, great again.

Posted by Libertarian Realist at 9:00 PM